This season, luxury jewellery is harking back to the big, bold gold of the 1970s, furnished with jaunty semi-precious and hard stones to bring it bang up to date

For a very “Marmite” style decade, the 1970s still exerts a huge influence. Whether you embrace the freedom, eccentricity and handicraft that the best of it represents, or you find the muted colours, odd combinations and detail overload backward-looking and unimaginative, there is no doubt that today’s designers are fascinated by the period and love to revisit it for new audiences.

Jewellery from the 1970s had a very distinctive style, which went right out of fashion as soon as the brash, shiny 1980s reared its “loadsamoney” head. For a new generation with a different mindset, 1970s’ style, with its focus on colour and unusual gemstones, pushes the buttons of those for whom individuality and handicraft are the driving forces. The originals were swept away by the white metal, clean lines and, some feel, chilliness of 1980s’ minimalism. Much 1970s’ jewellery was in bold yellow gold, harking back to the gold jewellery of the late 1940s that was itself a reaction to the white metal and monochrome of the Art Deco era. Some leading names of the period were specialists in working and engraving gold — firms such as watchmaker-jeweller Piaget, based in Geneva, whose modernist, stone-set cuff watches appeared on myriad celebrity wrists, or Milan-based Buccellati, which specialises in hand-hammering gold to a grained finish like silk.

Adorning the gold was an array of semiprecious stones and hard stone minerals used in colour schemes far more adventurous than in classic high jewellery — brands such as Bulgari and Van Cleef & Arpels set the pace. At a time when myth and mysticism were grabbing everybody’s imaginations, the long-believed healing powers of crystals and minerals made these “new” stones even more intriguing.

Today there is a direct parallel. Interest in coloured gems is at an all time high, and even hard stones once considered modest have rocketed in price. Prize examples such as the flawless, graduated chrysoprase drops on Bulgari’s necklace, the turquoise sugarloaves, mixed with sapphires and diamonds in the Brownstone series of Harry Winston’s New York collection, or the huge cabochon lapis lazuli beads that Cartier balances with yellow sapphires and gold are rare indeed, and even stones once used in a supporting role can take centre stage, like Niquesa’s blue chalcedony ring or fiery mandarin garnets and imperial topaz in Chaumet’s Soleil du Feu necklace. The same applies to stones once scorned, including thin plates of diamond whose inclusions are now seen as characterful, or rutilated quartz with its light-reflecting golden needles (used huge and to great effect by Cartier) and rough diamonds, as championed in subtle shades by both Messika and De Beers — the latter for its Talisman range and now in high jewellery, especially yellows. Even milky, opaque diamonds have a high value, cut into unusual shapes in sulphurous yellows by Cartier.

Some colour combinations are still as popular as they were in the 1970s, but are now used more expansively. Summery turquoise and coral have long been the choice of southern European brands such as Bulgari, which, in its astonishing new Cinemagia collection, colour-clash turquoises with vivid mandarin garnets, deep amethysts and diamonds or adorn a Serpenti secret watch cuff with “scales” of coral plate and diamonds.

However, two stones stand out in bringing hard stones to a new generation. Rock crystal goes back to high jewellery’s Art Deco heyday, but has never been used so boldly as now, forming the “clouds” below the yellow diamond sun in Chaumet’s astonishing Soleil Glorieux tiara, or the precise geometry of 11 layers, with onyx, in Boucheron’s huge pendant that took over two years to make, or framing large, perfectly matched emeralds in a necklace at Cartier.

The other is a stone that for many years was regarded as unlucky (it is relatively fragile), but which has become popular because of its vivid, evanescent lights and total individuality — the opal. In between a conventional gem and an opaque hard stone, it comes in many colours, but all precious versions display “play of light”, where refraction inside the stone creates vivid glints of colour, from fiery orange to kingfisher blue. With different lights in every example, many find such gems more fascinating than the clearest, faceted stone.

Opals — especially the boulder variety from Australia, which are in a contrasting matrix of dark mineral — can come in large sizes, spectacular when polished. Cartier has unusual examples, mixed with other dark, stormy gems, as does Chaumet, using even darker, more fiery black opals. These are currently the most prized, as seen in Gucci’s first high jewellery collection, as a beautiful bracelet with diamonds, or topping a large gold ring like a coiled serpent. White opal can also shimmer with colour, best seen as plates in Boucheron’s circular earrings edged with textured gold.

Opal was used in the 1970s by avant-garde designers such as Andrew Grimà. That they are now in the high jewellery mainstream shows how integral hard stones have become to the modern world of gems. 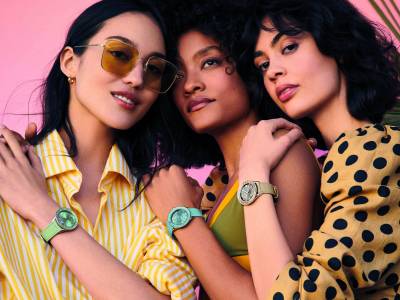 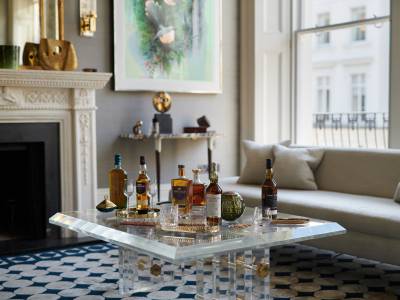