In the run-up to Rolls-Royce Motor Cars unveiling its first fully electric car, Spectre, SPHERE's Lisa Barnard headed to Monaco to discover the motoring legend's most classic car, Rolls-Royce Phantom and experienced first-hand its multi-faceted reinvention for a variety of car connoisseurs.

As Rolls-Royce Motor Cars created excitement last week with the reveal of its new ultra-luxury, sleek electric Super-Coupe Spectre, it raises an interesting dilemma about how automotive brands navigate the transition period before going all-out electric. In the case of the luxury marque, what is the next phase for Rolls-Royce Phantom?

The stated ambition of Rolls-Rolls is to have its entire product line fully electric by 2030. So, how to keep the momentum going and of course sales buoyant for the petrol-fuelled range?  While Ford has just announced it is ditching the Ford Fiesta, the world’s best-selling car, Rolls-Royce’s approach has been the opposite – nurturing and investing in its legacy range.

The jewel in Rolls-Royce Motor Car’s crown is undoubtedly Phantom, with the 7th generation launched in 2003, the Drophead Coupe in 2007 and the 8th generation Series II in 2017. In 2022 the marque did something rather remarkable. They invited media from markets all over the world to their first major initiative post-pandemic to discover the new expression of Phantom Series II 8th generation. In keeping with the spirit of Phantom, the car Rolls-Royce unapologetically describes as “the best car in the world”, this was indulgent in the true meaning of the word. Automotive brands tend to make a splash with a new concept car or the launch of a new model, such as Spectre, but this was a deep immersion into its new iteration of Phantom’s mid-life phase.

SPHERE was delighted to be invited to this Phantom Fest in the South of France. The stunning new Maybourne Riviera, a modernist hotel clinging precipitously to a rock jutting out over the bay of Monaco, provided a spectacular back-drop. I couldn’t help but agree with a quip from one our Rolls-Royce hosts: “It’s rather pleasing to look down on Monaco.”

The location of the South of France for this gathering was no coincidence. Charles Rolls, a grand and brilliant marketing genius encountered the engineer Henry Royce in 1904, and together they famously founded the company Rolls-Royce. Rolls was tragically killed in an aeroplane crash aged 32, leaving his co-founder in sole charge. Royce wintered in the South of France due to his ill health. Cars were driven across Europe for his inspection, then he would return to the factory and bark instructions at his staff, all in the noble pursuit of perfection.

In creating the new expression for Phantom, Rolls-Royce designers and engineers introduced only the lightest of design touches, in response to requests and feedback from customers.

Rolls-Royce Motor Cars CEO Torsten Müller-Ötvös described what the company wished to achieve in this new expression of Phantom: “As our pinnacle product, Phantom represents the very best of Rolls-Royce design, engineering and craftsmanship – a perfect blend of vision, creativity, the finest materials, skill, patience and precision. With Phantom Series II, we have protected everything our clients love about this luxurious item; subtle, yet meaningful enhancements reflect their evolving tastes and requirements. The changes we have made for the new Phantom Series II have all been minutely considered and meticulously executed. As Sir Henry Royce himself said: ‘Small things make perfection, but perfection is no small thing’.”

The Platino edition of Rolls-Royce Phantom

The jewel in Rolls-Royce Motor Car’s crown is undoubtedly Phantom, with the 7th generation launched in 2003, the drophead Coupe in 2007 and the 8th generation Series II in 2017.

In 2022 the marque did something rather remarkable. They invited journalists from markets all over the world to their first major media initiative post-pandemic to discover the new expression of Phantom Series II 8th generation.

In keeping with the spirit of Phantom, the car Rolls-Royce unapologetically describes as “the best car in the world”, this was indulgent in the true meaning of the word. Automotive brands tend to make a splash about a new concept car or the launch of a new model, such as Spectre, but this was a deep immersion into its new iteration of Phantom’s mid-life phase. 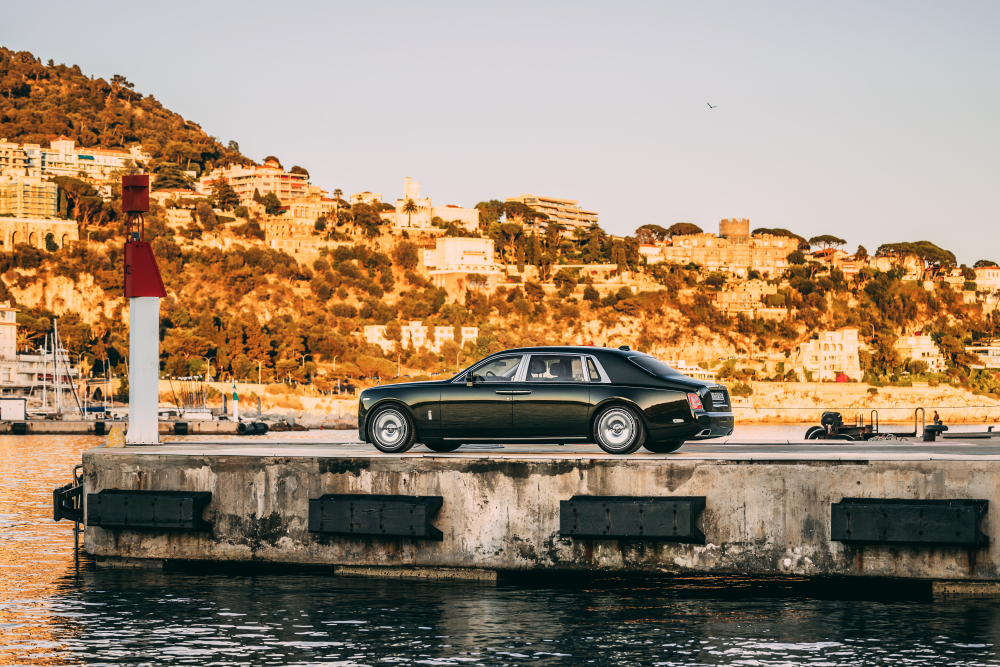 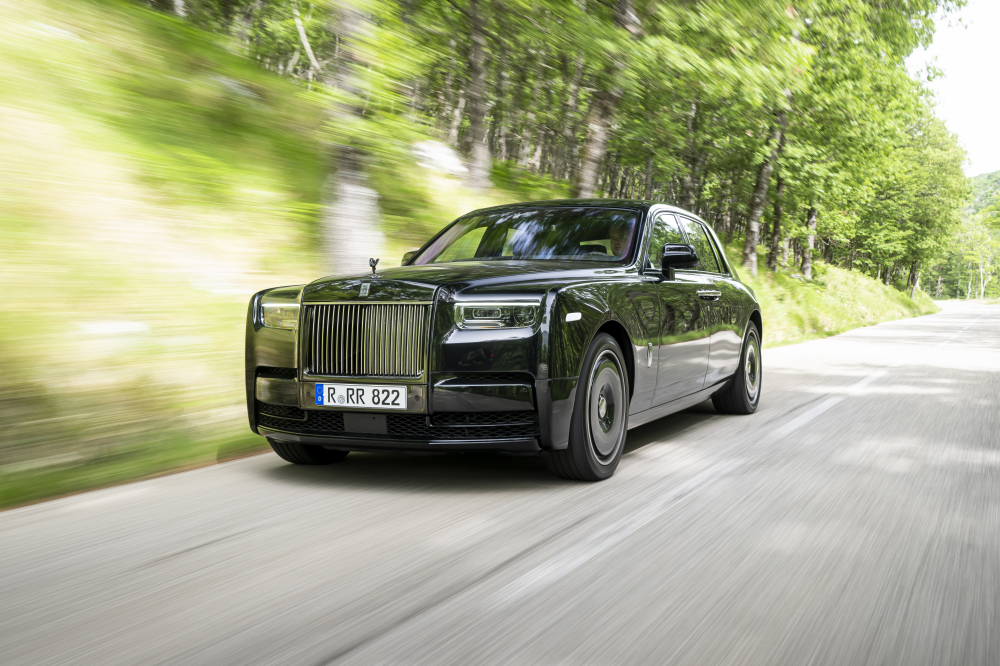 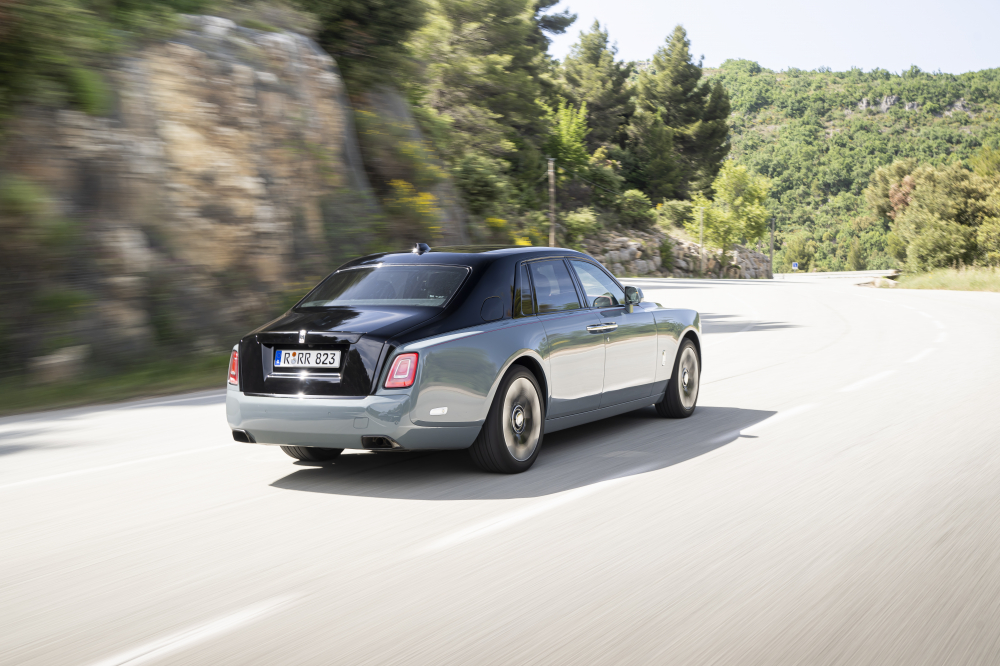 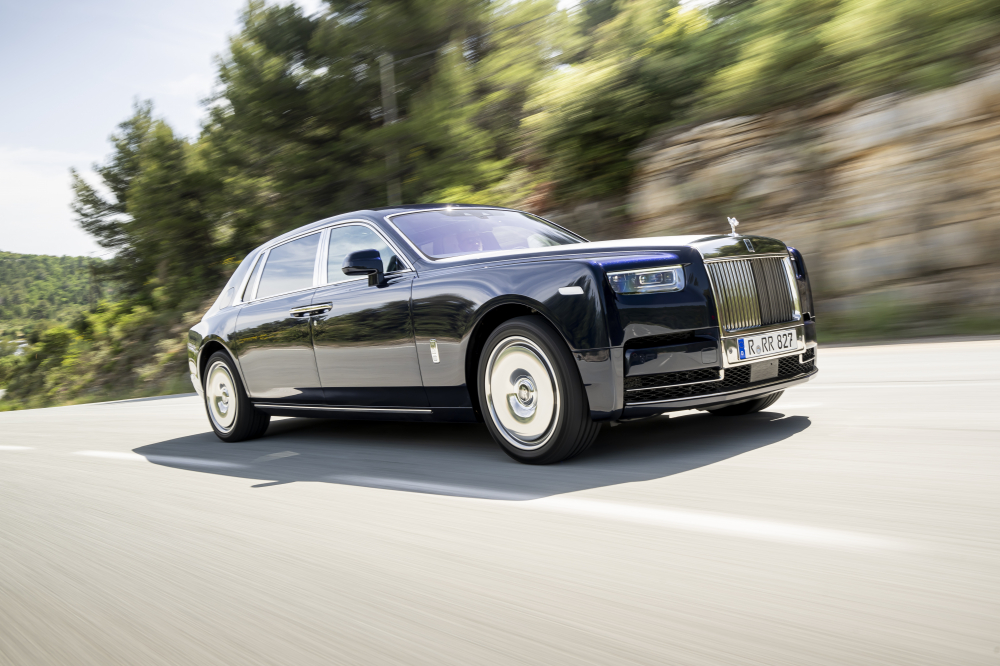 The new expression, it is stressed, is not about what should be changed, but what should be preserved and the extent to which every Phantom can be personalised to the customer’s style and choices. Rolls-Royce describe the starting point of Phantom as a “blank canvas”.

Even if you want to buy a non-customised Phantom, you must customise it. To demonstrate this they went to the lengths commissioning 10 bespoke “exemplars” for this event based on different customer personas: above in the slide show The Connoisseur, The Iconoclast, The Maverick, The Aristocrat. In addition, The Platino, The Patriot, The Founder, The Prodigy, The Sentimentalist, and The Extrovert.

Each guest was matched with a spec which our hosts deemed to suit us individually and this was the car we were allocated to drive along the coast roads and hilltop villages of Provence. I was matched with “The Extrovert”, in sumptuous aubergine, one of my favourite colours. This car also suited the tastes of my Italian co-driver, who did not let down his nation’s reputation, and was not daunted by speed on the tortuously winding roads. You might wonder about the expense of commissioning 10 individual Phantoms for a media event – but there is no question the cars will end up in good hands. During our stay an existing customer happened to be staying in the Maybourne Riviera and caught sight of a car that took his fancy from his terrace – and came out to make a few enquiries.

What was evident from all of the specs, is that the new expression, whether applied to the normal Phantom (of course that’s tautology) or Phantom Extended, has retained its imposing presence. On the inside, whether driver or passenger, you waft along unassailably, as if gliding over ocean waves; from the outside heads invariably turn in the serene aura of your passing by. The steering is surprisingly responsive for a vehicle measuring almost 6 metres, 2 metres wide and weighing three tonnes. This is not an unwieldy tank – the engine is a 6.75 litre V12, which delivers a top speed of 155 mph and does 0-60mph in 5.6 seconds and an impressive torque.

The Founder edition of Rolls-Royce Phantom

The new expression of Rolls-Royce Phantom

What else is new for 2022? A polished horizontal line between daytime running lights above the iconic Pantheon Grille gives it an edge of modernity, and a subtle geometric change to the Grille makes the ‘RR’ Badge of Honour and Spirit of Ecstasy mascot more prominent when viewed from the front – also pleasing to the owner on the inside. The grille is illuminated, a feature introduced in Ghost. The headlights sparkle with laser-cut bezel starlights, creating a visual connection with the Starlight Headliner inside, adding a shimmer to Phantom's night-time attire.

The Pantheon Grille of the Rolls Royce Phantom Edition, The Prodigy

Phantom’s silhouette retains Rolls-Royce’s signature short front and long rear overhang, the long wheelbase and broad c-pillar, keeping the key lines running from the Spirit of Ecstasy at the tip to the tapering rear tail. The undercut 'waft line' creates a strong shadow, visually embodying what Rolls-Royce refers to as the ‘Magic Carpet Ride’.

A new suite of new wheels in milled stainless steel with triangular facets can be commissioned in fully or part-polished finish. Alternatively, you might choose a stylish disc wheel, either in polished stainless steel or black lacquer, reminiscent of Rolls-Royce cars from the 1920s.

The interior of The Iconoclast spec of Rolls-Royce Phantom

And for those who wish to magic up a virtual concierge wizard, Phantom has introduced  ‘Rolls-Royce Connected’. This enables the owner to send an address to the car from “Whispers”, the Rolls-Royce private-members’ application, providing navigation to your destination, which might be a top restaurant or an exclusive event. It’s not just a grand way to sat-nav, they might even get you in!

The embellishments are endless in possibility – from doors that close with the touch of a button, reclining massage seats, picnic tables, infotainment screens, fold-out drinks cabinet (for the passengers of course), a cigar humidor in the armrest if you are so inclined,  your personal powder room with light-up vanity mirrors for the finishing touches before the next red carpet event , umbrellas secreted in the doors, swish blinds, the coolest of sound systems embedded in the chassis. The choices are infinite.

The Sentimentalist spec of Phantom, by Rolls-Royce

Then there is the “gallery” where you can embed your own work of art to slide under the glass on the fascia or dash. playing with the textures and fabrics, for example  we saw silk interiors woven with flowers; a Phantom matched to a piece of indigenous art the owner admired; Phantoms dotted with feathers, sculptures, or gold.

The customisable interior of The Platino edition of Rolls-Royce Phantom

I remember the thrill of experiencing Rolls-Royce’s "new" Phantom for the first time. In 2007 the Brand Communications honcho at the time, Giles Clayton-Jones, insisted on lending me the lofty vehicle for the weekend and advised “you must drive somewhere, far away, through the English countryside”.

We duly fetched our Phantom from the Berkeley Square dealership and parked it in our North London residential street overnight. I had never met so many neighbours from our road as on that day. There was no twitching of curtains, neighbours came straight out of their houses, drawn by this fantastic beast on wheels and riveted by its magnificent presence. Some were propelled by envy; the misconception that I had inexplicably landed a massive bonus. The Phantom came with a mere £250,000 price tag at that time – it is now £500k upwards.

We drove to Cumbria with 3 young children in the capacious passenger rear. Heads swivelled on the motorway, especially when we stopped at a drive-through Burger King just beyond the North Circular and when we arrived in Cumbria at Morrison’s in Kendal to pick up some groceries. Ours was, no surprises here, the only Phantom in the parking lot. Like a ghost it sadly vanished back to Mayfair the following Monday. Next on the wish list and better for the environment is Spectre, but it will be a sad day when Phantom finally reaches retirement age.